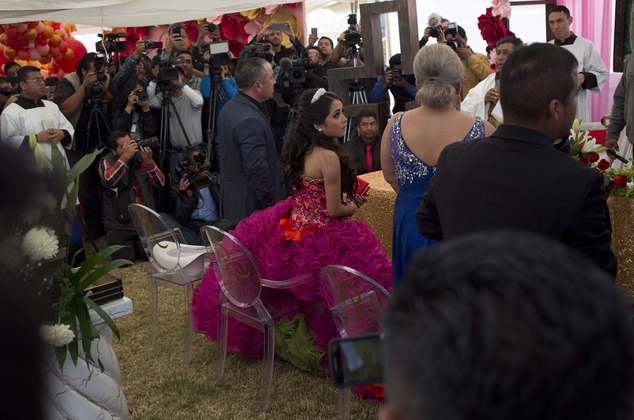 Ruby Ibarra, a Mexican teenager, probably had a party of her life this Monday. She was celebrating her 15th birthday, commonly known as “quinceanera”, or coming-of-age. After the Governor of the Mexico State, Eruviel Avila Villegas, saw Rubi’s father posted a video message inviting “everyone” to her birthday party, he was generous enough to offer a free vacation spot for the celebration, Valle de Bravo.

The 15-year-old has become something of a local celebrity after her parents’ Facebook invite went viral.  In the 45 second clip, Rubi’s parents Crescencio and Ana Elda, stand on either side of her while her father calmly extends an invitation to her birthday party.

Social media quickly picked up on the message and reporters from all over the country invaded the family house. Just a few days after the initial invite, more than million people were expected to visit.

When asked what was the point of inviting the whole country to his daughter birthday party, the father answered that he would feel bad for turning someone away, so this was the easiest solution. The video was shared more than 800,000 times.

On Monday, just one day after Christmas, hundreds of tents and tables were prepared for the guests, with dozens of trucks of food and beverage on their way. Mexican families are known to throw very expensive coming-of-age parties, regardless of their social and economic status.

Ruby Ibarra greeted the first guests personally, wearing a mix of modern and traditional dress and a tiara. As if it wasn’t enough, three local bands and a horse race were also a part of the celebration, and the winner would be awarded 10,000 pesos, which is around $500.

Of course, the invitation sparked internet memes, jokes, parodies and even sponsorships by companies, comedians and other entertainers. For example, Mexican airline Interjet published a promotion offering 30% discounts on flights to Rubi’s birthday party, with a simple and effective slogan “Are you going to Rubi’s party?”