According to official claims, the President of Venezuela, Nicolas Maduro, has been given the legitimate power to rewrite his country’s restitution. The Constituent Assembly election will allow Maduro to replace Venezuela’s current legislative body — the National Assembly — with the new assembly, which would be made up 545 members, all nominated by his administration.

The opposition coalition said 88% of voters abstained and it refused to recognize the election. It also called for more protests on Monday. President Nicolás Maduro hailed the poll as a “vote for the revolution”.

It was a victory speech for him and his followers but after a day of violence on the streets it’s a pretty hollow victory. For all the talk of the vote being an example of democracy, critics accuse him of voter fraud and intimidation and many don’t believe the official numbers of voter turnout.

By taking control of the National Assembly, Maduro will be granted power to alter the Constitution

Opposition leaders had called for a boycott of the vote, declaring it rigged for the ruling party, and by late afternoon they were declaring the low turnout a resounding victory. Organizers said preliminary results from observers placed in nearly every district indicated a small fraction of the turnout seen in previous elections had voted. “It’s very clear to us that the government has suffered a defeat today,” said Julio Borges, president of the opposition-controlled but largely powerless National Assembly.

The results of the poll caused much stir and anger among opposing parties, and immediately after the results were announced, protesters gathered on the streets, calling for a revoke.The government responded by deploying armed police and soldiers in an effort to preserve order. 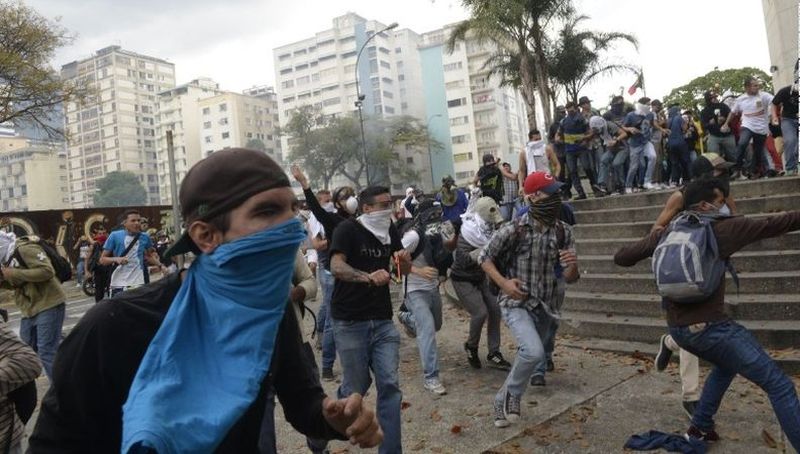 Thousands of protesters rushed to the streets, sowing their anger for Maduro’s leadership and changing of the Constitution

National Guardsmen clashed with opposition protesters and police fired tear gas at crowds in Caracas. As dozens of police officers rode motorcycles through the Altamira neighborhood, a large explosion went off. AFP video showed two officers, each with a leg on fire as comrades rushed to help them. At one spot in the capital, opposition demonstrators set up barricades on a highway.
Speaking after Sunday’s controversial election, Maduro claimed that the opposition turned down an offer from his government to postpone the vote. Two weeks ago, representatives of his government offered the opposition the chance to put up candidates for the Constituent Assembly election and to postpone the vote for 15 days, Maduro said. The opposition has boycotted the vote because they say it is illegitimate, and refused Maduro’s offer, the President said.