We found a list of  Highest Paid YouTube stars  on smartearningmethods.com, and these 15 channels have left a huge impression on the global stage with the help of YouTube. Check it out:

Originally named as Felix Kjellberg, stands first among the  Highest Paid YouTube stars. The Swedish international has around 40 million subscribers to his channel. With an estimated $12 million/year earnings this year, he sits on the top of the list.

Rafi and Benny are two producers. Having a total subscription of 13 million on their channel the brothers have an earnings of $8.5 million.

Tied with the Fine Brothers, the comedian duo of Hecox and Padilla earn an astounding $8.5 million/ year. They have a following of 21 million subscribers and the numbers keep on growing every day.

The ballerina who spreads her magic by playing a violin has a huge following of 7 million subscribers. According to a report, she will earn $6 million this year. 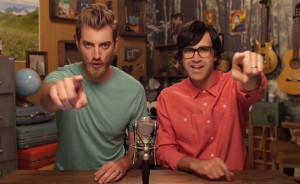 They are known by the names of Rhett McLaughlin and Charles Lincoln Neal III. These engineers’ tag-team comedians have an annual earnings of $4.5 million and a total of 3 million subscribers.

Owner of the channel ‘KSI’, the hip-hop rapper is a FIFA enthusiast. His wealth empire is of$4.5 million. His fan following makes him tie on the number 5 ranking with Rhett and Link and a following of 10 million subscribers.

The famous beautician had a tough start to her career as she was rejected by a few firms. She now has a wealth of $3 million through YouTube. And the number of subscribers on her channel are 8 million.

The internet sensation recently landed a contract with the Collective Digital Studio network. She earns $2.5 million through YouTube and has 7 million subscribers. She controls the channel ‘Superwoman’ on YouTube.

The prankster earns a total of $2.5 million and is tied on the 8th spot with Lilly Singh on the top earners list. 7 million subscribers follow the prankster on YouTube.

This internet wizard is known for her cupcake baking skills. She earns $2.5 million and is tied on the 8th spot with Roman Atwood and Lilly Singh. Her enormous fan base comprises of 5 million subscribers.

The Japanese sisters, with the help of their parents hold the 11th spot according to the 2013 survey. They owned $3.2 million at that time.

According to the list of 2013, the Chilean entertainer has a 20 million subscribers and earned a $3 million yearly.

Famous for his Call of Duty reviews, the online gamer holds the 13th spot according to the list of 2013. At that time he earned $2.7 million.

Famous for his minecraft gaming skills. The Spanish international owned 2.59 million as per the list of 2013 high-earners from YouTube.

The duo of Jeana and Jesse hold the 14th spot on the list of 2013. According to the reports they earned $2.26 million at that time. Some may disagree, so we also found this video with the a list of only 10, did your favorite youtuber make the cut? https://www.youtube.com/watch?v=bERFIZdunSI