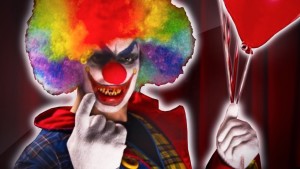 Are you scared of clowns?

With the wave of the “creepy” or “killer” clowns hysteria sweeping the United States, the UK,  Australia,  Brazil and far beyond — forcing McDonald’s to limit the appearances of its mascot Ronald McDonald — we found an article from France 24/7 where experts explain how the phenomenon could have taken such a big amount of people have gone along with it – and got in a lot of trouble.

How did the ‘madness’ start?

“Everybody is acting as if this is unprecedented, that it has never happened before,” said sociologist Dr Robert Bartholomew, author of “The Martians Have Landed: A History of Media-Driven Panics and Hoaxes”.

“But exactly the same thing happened in France in 2014 and it was also fuelled by social media, bogus sightings and video hoaxes. Now it’s happening in America people are paying attention. But it was quite intense and violent in France” leading to the arrest or jailing of a dozen teenage “killer clowns”.

“I believe what is happening is a reappearance of the ‘stranger danger’ panic of the 1980s.

“Social panics reflect current fears and uncertainties, especially the threat from within posed by strangers, prompted by concerns over terrorists and refugees.”

The New Zealand-based academic said while the clown panic may seem like a very modern “outbreak of madness and stupidity”, such scares were common long before social media was there to drive them.

“In 1750, a kidnapping panic swept Paris driven by claims that King Louis XV was suffering from leprosy and was having children kidnapped to cure his condition by bathing in their blood. It triggered riots as mobs chased suspected kidnappers through the streets.”

For the last 30 years “the malevolent clown” has become a fixture of popular culture, according to French anthropologist Veronique Campion-Vincent, an expert on how rumours and urban myths spread.

Chilling characters like Pennywise the clown in Stephen King’s novel “It” and the evil clowns in the “Poltergeist” films have helped cement a darker side to clowning.

“Clowns can be seen as creepy because you can’t read a clown’s face, and 80 percent of communication is non-verbal,” Bartholomew argued. “If a person is wearing makeup or a mask, it is hard to know whether they are friend or foe.”

Coulrophobia — the fear of clowns — may affect as many as one in 10 people, said Matthew Lorber, director of the child and adolescent psychiatry department at Lenox Hill Hospital in New York.

Bartholomew said the idea of the “cunning, murdering clown” first emerged in the 18th century and reappeared in the “dark carnival” circus sideshows of Depression-era America.

But their traditional family-friendly image was reasserted by Bozo and Clarabell the Clown, who were huge stars of 1960s US television.

How long will it last?

“It is not a good time to be a clown. Careers are being ruined here,” said Bartholomew, who predicted that the scare would die down after Halloween, as it did in France and Belgium in 2014.

However, the #ClownsLivesMatter Twitter campaign launched by Snuggles The Clown — the professional American “scary clown” Jordan Jones — came out of a real fear of people getting hurt, the academic said.

Watch this video explaining it: